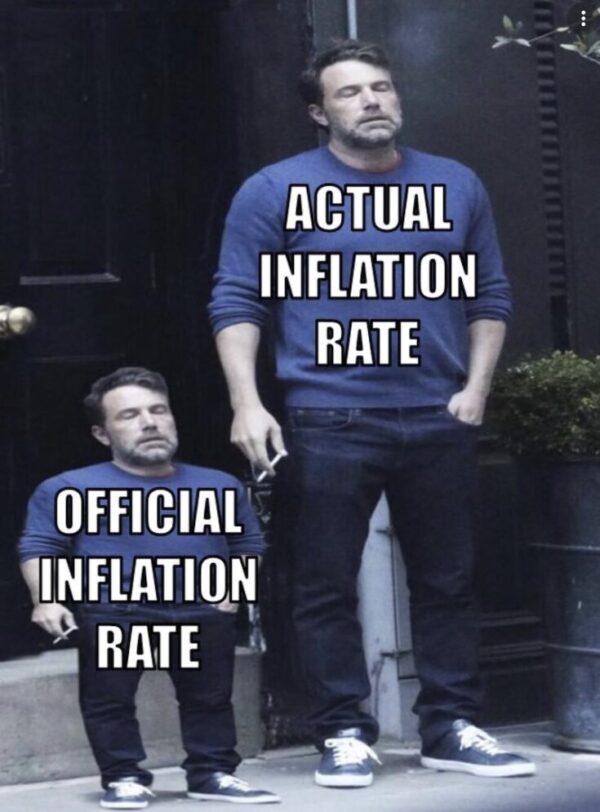 Why is it that I feel like we are living in 1976? WIN (Whip Inflation Now) buttons are all we need, Ford vs Carter, and an unabated inflation rate. Yep, good times. It took nearly 7 years to halt the skid from the Ford and Carter eras, and another 4 of so so performance under Bush !, and 4 years of Clinton before we had a balanced budget. We have not had that ever since.

Now, with gas prices rising 250%, rents rising, interest rates claiming to battle inflation, but pay staying roughly the same, we got problems. The U.S. is printing money like a banana republic. If you look at the rate of inflation (which, realistically is “shrink”, a term used by businesses as slang for, well, theft) you will see that prices are rising largely because your money is being devalued. In other words we, you and me, are being stolen from.

I mean, look at this!

More damning to the current administrations policies is this from the same page:

Well, will you look at that. The inflation rate has not just grown under our current leadership, it has downright surged!

Not our usual content  – but inflation rate is important!

While our normal fare is funny stuff, curated on the internet, yet this topic cannot be ignored. It impacts each and every one of us, daily. And, as the lead image shows, the “official” rate really lags behind the actual rate of loss. Let me ask you, does your paycheck buy you as much as it did 2 years ago? Are you better off now than two years ago? Are we really “building back better”?

Back to our normal content on Laughshop.com, and our diverging from that, I do firmly believe in the power of the word. I do not normally write entries on Laughshop.com, because I am not a comedy writer. I have been editing and curating funny stuff and images since 1998, however, and while I love doing that and building the social network, on other sites I am a blogger and vlogger. I do not belong to any political party. I lean towards conservative, however I also recognize that many liberal policies over the years had merit. Not all, by any stretch, but many. I do, however, believe in personal empowerment, and individuality freedoms tempered by accountability. In other words, doing for oneself, and having the liberty to do so, it what makes this nation great.

So, let’s ask ourselves a question:

The whole premise of “selecting” the current administration, of folk “choosing” Biden over Trump, (yes, I believe 2000 Mules has it right) was a visceral dislike of the Trumpster. Yes, his tweets and gaffes earned him the name “T-Rump”, however, it appears that he had the nation’s better interests in mind, and in hand, FAR better than the doddering fool in office now. So, the question is, is the current administration really this incompetent? Or was this economic plane crash planned all along?

Did you notice that the spike in the last graphic generally corresponds to the inflation rate? “Well, adjust for inflation, why don’t you?”

Ok, well, see below. At the same time, bear in mind newer homes are generally better engineered than 1960, and earlier, homes. They tend to be larger, better insulated, better roofs, and have better HVAC systems. Todays home are generally better than post WW2 boomer built homes.

Still think inflation rates aren’t a problem that is getting worse?

No wonder the tinfoil hat crown is all wound up! From NWO, illuminati, puppet president, these times have given them a lot of ammo! Covid and the 12% efficacy of the jab, I mean, good grief, no wonder the world laughs at us and the kid sniffing leader, you know, the man Kamala bosses around.

Oh, and let’s not even talk about the mysterious food processing plant fires…

Breaking it down to fixes:

It so simple a cave man can do it. Sorry Geico, I had to co-opt that line. Honestly, only a moron in charge of a banana republic would do it. “Got debts? Print money!” Ah, crisis in Ukraine, print money. Inflation rate be damned. Inflation slimation.
Hey, has anyone else found it wonky that the SAME country that little Shmo Biden, what was his name? Ah, yes, Laptop Hunter. The same country Hunter was in busines with while his pops was Vice President, you know, the same country his pops was filmed bragging about extorting result from? The current leader of Ukraine is the successor to the one Dementia Joe was extorting. Biden, the Elder, pressured them to fire a Ukrainian who was investigating Hunter’s ties? Funny how now Ukraine is being sent so much of your money to. And folks, it is YOUR money.

Thousands of jobs lost. Fuel prices through the roof. I don’t know about you, but I’m paying $6.35 a gallon right now.

While we’re at it, open the fracking as well. At the end of Trump’s term the U.S. was, for the first time in decades, energy self sufficient. Oh, sure, articles will spin it all sorts of ways, but the fact is we are importing more oil than we export. And guess what? Russia is one of the worlds largest oil exporters. So, sure Dementia Joe, make an enemy of Russia so you can control the info on your son, all while stifling oil production, and jobs, and economic growth, and spur the inflation rate, right here at home.

Enough said, the lines above cover this.

Keep American Dollars in the U.S.

Hey, guys, do we have to be the world’s police and their food bank too? Let’s stop these aid packages for every country in the world and go back to focusing on ourselves. And while we are at it, let’s go back to buying American products whenever we can. Yes, the truth is we will pay a lot more for said products, but we’re paying more anyway when you consider how inflation rates are erasing the value of our money.

Shoot, the D.C. swamp is swampier than ever. You do know that Washington D.C. was built on swamp land? Now you do. The worst of the worst are Nancy, Kamala, and Joe. 25th amendment Dementia Joe out, impeach Kamala, imprison Nancy.

Term Limits are a thing

Okay, the founding fathers never intended for legislators to be in office as full time jobs. They would serve a term or two, and return to their regular jobs. And with many of these mummified monsters sitting in D.C. for 40 plus years, I can only imagine the founding fathers rolling in their graves. The inflation rate goes unchecked by careen politician, who routinely vote themselves pay raises? They are out of touch with you and me.

Two terms for senators, 4 terms for representatives. Period. Raise the pay, and limit the terms. Problem solved. The present is limited to two terms, so the office does not abuse power, but what of the house?

Once we stop printing money, the value of money will increase. Prices will drop. And interest rates can too. simply stop the presses. The tin foil crowd will tell you the whole inflation rate and devaluation of money in intended to lead us to a “great reset.” This includes the green economy, digital currency, and a one world government. Just stop printing money, keep interest at 1%.

Okay, while this has nothing to do with the inflation rate, it does impact everyone fiscally. Simplify the tax code. You make $100,000, you pay exactly $15,000 in tax. Simple as that. No write offs. No loopholes. Everyone pays a fair share based on a percentage.