Inflation is so high that 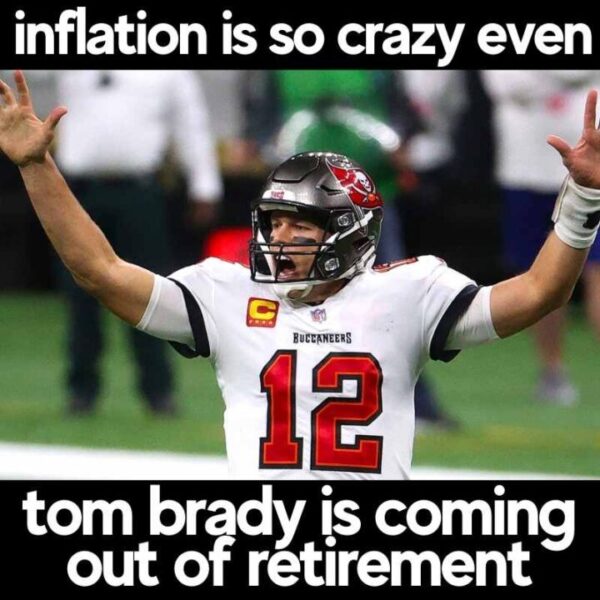 Inflation is so high that

Even Tom Brady is coming back, proof that the inflation rate is so high u thinkable things are happening!. Shoot, among his millions made, he is probably a dollar-aire now, just like the rest of us!

Can you blame him? Even the wealthy and talented set feel the pinch.

Right, so, in reality inflation is probably not the reason for Tom Brady t come back to the game. Let’s face facts: Tom Brady is a championship machine. So, you have his drive, goals, to win and be the best, and a ignominious end to the 2021 season, losing to the Rams (the eventual champs) of course Tom is coming back! It makes scant difference that inflation is so high that is long term financial health could, or could not be, in danger.

If a mad scientist were to sit down with the intention of creating a machine that did just one thing, win, he or she could do no better than creating Tom Brady.

I can say that now

A few years ago, when he was playing for the loathsome Patriots, I could not stand to watch him play. Nor the Pats themselves. And their winning ALL THE TIME was, perhaps, a lot like what hell must be like, painful never ending shame and torture. However, I dislike the Buccaneers too, but it’s not even on the same level. I mean, at least they are in the NFC! Thus I can, with a clear conscience, cheer on Tom and the Bucs, except when he, and they, play my Rams.

Back to the cost of living

Ok, inflation is so high that…

It’s estimated that Tom Brady has a net worth of $250 million, according to celebritynetworth.com. If you add his wife Gisele Bundchen’s $400 million net worth into the calculation, the couple’s number is closer to $650 million.

The above is from TheStreet.com

Is that any way for the G.O.A.T. to finish out?

Laughshop.com is one of the longest established humor portals on the planet, if not the longest. We began as PJSROFL, back in about 1998 or so.

We also have a social community at https://laughshop.com/activity-2/ where you can share your thoughts, humor, and memes. That is what brought Laughshop.com into existence in the first place: sharing the funny.