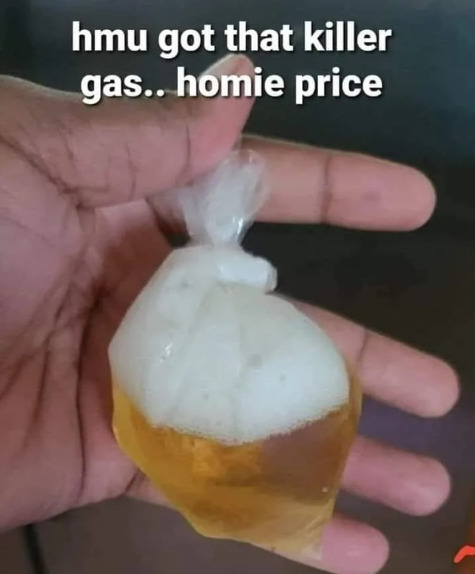 Are gas dealers and other such black markets the future?

Many of us knew January 6th 2020 that gas prices were going to rise. Many suspected that interest rates would rise, prices would rise, the dollar would be devalued. States mandating increased minimum wage rates, labor shortages, and government handouts. Yep, all of it happened, and continues to occur.

With that said, the quickest and easiest litmus test of the economy is to gauge gas prices, as that one indicator effects so many other items that is boggles the mind. The only ways Biden could have hurt the US economy worse is to ban gasoline and diesel entirely. He has, in part, done just that. Or, perhaps, surrendered the country to some third world nation. Instead he has opted to make the US a third world nation.

History always repeats itself, eventually. Make an item illegal, or difficult/expensive to obtain, what happens? You get black markets.

Liquor bootleggers were black marketers in the 1930’s. In fact, from the 1929 start of the great depression (we are heading towards the Greater Depression, BTW) until 1939, 1940, when economies started growing again, black market good were quite common. As a matter of fact, even today black markets exist. And we are going to see Biden Black Markets, without question, BBMs. And you can bet there will be BBM gas dealers in the black marketplace.

But first, what are black markets? This for you youngun’s out there.

But why Biden Black Market – BBMs?

Well, if President Herbert Hoover was alive today (he would be 148 years old in 2022, so that would be a feat!) he would ask “Why Hoovervilles?”
You see, he was president when the Great Depression began, and presided over the first portion, 4 loooong years. So, the left deemed the squalor, the indigent people living in cardboard shanty cities, the clumps of homeless living in parks, Hoovervilles, placing the blame solely on Herb. Was that fair? Maybe a little, because he seemed to be out of touch with the people and their plight. And what of Residnet Biden? Oh, sure, this man weakly pretends to be concerned. However, he is, without question, oblivious to the plight of todays citizens.

So, the black markets, which are surely coming, replete with gas dealers, will be called BBMs, Biden Black Markets.

How does a repressed society deal with devalued money, scarce commodities, scare tactics and detached propaganda? Well, one way is…

You just may see gas dealers, who may look a little like drug deals of yore. Or of now, but I’m assuming the will move into the much more lucrative gasoline dealing field. Yes, I’m being facetious here, but only tugging legs rather than outright pulling them.

Food, it is getting scarcer by the day. Fuel, why the taxes in California alone are punitive, with each gallon carrying $1.18 in taxes! Shoot, I remember being freaked out a little when the total price of gasoline was $1.18 a gallon! Why wouldn’t some smart hoodlum  steal gas and sell it at a discount? Gas dealers would be view as people’s HEROS, not villains! Ask Michael Franzese about that, someone who turned his life around, from criminal, to upstanding man. He was a hero to many, but certainly not to the government. The government hates the sport of competitive stealing, they want that to be their thing, alone.

Housing is in short supply. Inflation is rising, buying power, dropping. We’re sending billions of YOYUR money to other countries, printing it like monopoly money. Yes, BBMs, Biden Black Markets are a sure thing. And while BBM used to stand for Blackberry Messenger, or Big Beautiful Man, it carries a whole new cache.

Going forward, you may not have to resort of a shady back alley deal with a gas dealer on the BBM. There are options, such as…

This is all well and fine if you’re Amish, or want to party like it’s 1799, however, bear in mind that fossil fuels are used to plant, tend, harvest, and transport horse feed. So, while you may not be paying for higher fuel prices directly, you are still paying for them

While electric vehicles are largely immune to fluctuating “fossil” fuel prices, they are not entirely safe from them. The production at lithium miles uses fossil fuels, and generates pollution. Transporting that ore, refining it, all of that does as well. Transporting the cars from the factory, are there electric Tesla trucks hauling these EV cars yet? Nope, Diesel and gasoline. Tire production uses petroleum. Wiper blades, rubber gaskets, and those parts, too, use fuels, not ions.

And what is used to generate all that electricity used for charging electric vehicles? Natural gas, mostly, and you know what that is? A fossil fuel. So, you see, even Tesla is not same from the temptation of visiting gas dealers. Yet, when the grid is down, that can be an issue!

Get on your Bikes and Ride!

Freddie Mercury and Queen were way ahead of their time, no? Well, no, The song Bicycle was about, erm, something else.
A good many people, especially in China and such places already do ride the heck out of their bikes, so they will likely ever visit the gas station, except to the air their tires, or gas dealers. Still, you oil the chain, your tires are made from oil products, and, well, odds are you are not commuting all that far.

Shanks Mare, walking, is an option, and you have no need at all for gas dealers. However, good luck with that road trip!

Growing up back in the day, you’d be hard pressed to find me without a skateboard. I rode them everywhere, and your dependence on fossil fuels is very, very low. On the flip side, seeing a grown man in suit carrying a briefcase on a skateboard would be priceless!

Just pay it and don’t eat

This is not a great option, but since old Joe and his faulty ideology is in our business, this is a viable option, especially since food shortages, while happening now, will likely get worse.

So, go find yourself a gas dealer, ot become one. Just remember, don’t drive on your supply.

I don’t normally write entries on Laughshop.com. I am not a comedy writer. I have edited and curated funny stuff and images since 1998, however. And while I love doing that, and building the social network, on other sites I am a blogger and vlogger. I do not belong to any political party. I lean towards conservative, however I also recognize that many liberal policies over the years had merit. Not all, by any stretch, but many. I do, however, believe in personal empowerment, and individuality freedoms tempered by accountability. In other words, doing for oneself, and having the liberty to do so, it what makes this nation great.